Religious Structures within Newfoundland that were built in the 1950’s and 1960’s were heavily influenced by new architectural methods and styles that were becoming popular elsewhere in North America. During this time, clergy in Newfoundland became infatuated with modern design for new places of worship.

Examples of this can be seen along Elizabeth Ave within Churchill Park.. 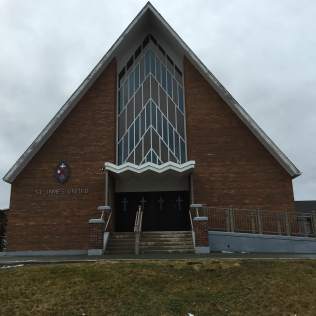 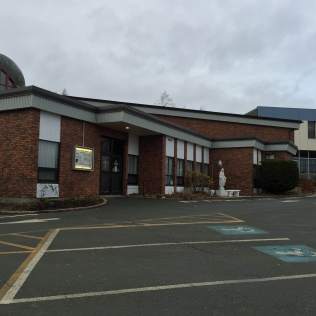 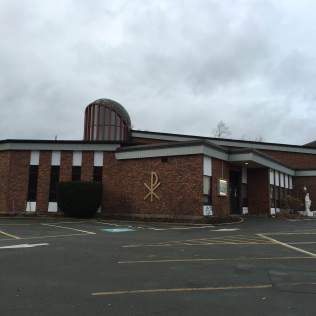 A: With the City of St. John’s expanding, and the completion of the Churchill Park Subdivision, the various religious bodies within the province still thrived to have large congregations. The modern architecture shown along Elizabeth Ave, provides a great example of how physical changes to the style of buildings were also meant to change peoples perspective of the Religious community within St. John’s

Examples of traditional architecture among religious structures can be seen throughout St. John’s downtown core, with churches such as,

The Basilica of John the Baptist (Catholic) – 200 Military Road
Click here to find out more about The Basilica!

Q: How has Beth El Synagogue changed from its inception to now?

A:  At its completion, Beth El Synagogue was considered a architectural treasure, as the black and white photo above depicts. Newfoundland Modern: Architecture in the Smallwood Years, 1949-1972 describes the building as,

“The front of the synagogue demonstrated strategies often used by Frank Lloyd Wright in his projects. These included basic rectangular or L-shaped forms; layers of low walls, planters, steps, and landscaping to create visual depth; asymmetrical, informal exteriors; extensions of a building into the landscape; and an indirect path to the front door. The exterior walls of Beth El were constructed of painted concrete, and, according to the working drawings, its curved front concrete wall had a textured bush-hammered finish. The main body was painted in gray with a bold white accent.”

However, in 2001 the congregation of Beth El would face a decision that would result in the partial deconstruction of the building, with Newfoundland Modern: Architecture in the Smallwood Years, 1949-1972 , further stating that,

“Forty-five years after the construction of the synagogue, the members of Beth El faced a very difficult decision with regard to the upkeep of the building.”

A: Strangely enough, it is! The transformation from the origins of religious buildings from their inception until now is extraordinary!

List of the world’s most spectacular churches built after 2000!

Q: Did St. David’s Presbyterian Church originate with its location on 98 Elizabeth Ave?

A: St. David’s was actually founded in 1775, as its sign indicates, first being located in downtown St. John’s – not far from the Anglican Cathedral!

Q: How do the five religious buildings on Elizabeth Ave compare to one another?

A: The religious institutions along Elizabeth Ave all have similar facades, and style of architecture with the exception of Beth El. St. David’s, St. Augustine’s, St. Pius X, and Saint James are all brick structures which take advantage of the sharp edges and curves that are common among 1960’s design. Beth El being perhaps the most unique out of the bunch, even today with only half of its structure in tact it stands out from the rest of these buildings.