Violence against women is a long standing problem in Canadian society and people are beginning to bring public awareness to the issue. High profile cases such as the Jian Ghomeshi scandal have opened the doors to discussion and one would think the government would do the same. Canada has a very specific issue, which is the result of race and gender inequality: violence against Aboriginal women in Canada is startlingly common. According to Statistics Canada, Aboriginal women aged fifteen or older are three and a half times more likely to be victims of violence than non-Aboriginal women.

In addition, there are hundreds of unsolved cases of missing or murdered aboriginal women in Canada. These statistics are undoubtedly  shocking, yet the Canadian Government has not addressed the crisis. As long as the Harper government continues to ignore the issue, women will continue to suffer.

Why are Aboriginal women experiencing this crisis? The violence can be traced back to colonization, when Europeans influenced Indigenous peoples to such an extent that Aboriginal women still live in a world saturated by inequality. The patriarchal forces at play within European society transformed Canadian society and new family structures  developed. Brownridge notes in his 2008 paper that the European alterations of Aboriginal life has led many modern Aboriginal women to live with certain circumstantial and ”social background variables” that put them at greater risk of violence. These variables include: younger population, lower educational attainment, increased involvement in precarious work, increased alcohol/drug use, increased family size, and living in smaller, rural communities. These variables largely stem from the marginalization of Aboriginals colonization through residential schools, unfair treaties, denial of certain rights, and assimilation policies. These practices perforated the aboriginal community, creating generations of disadvantaged individuals who are at a greater risk for violence.

Aboriginal women are over-represented in the murdered/missing categories. Note that cases involving aboriginal sex workers are far less likely to be solved. This is a large problem in Vancouver’s downtown east side.

This phenomenon is not confined to Canada, as colonization has had a negative impact on the lives of modern Aboriginal women in Australia as well. Melissa Lucashenko notes that their struggles have been largely ”invisible” to mainstream culture, something that has been the case in Canada until recently. Colonization has had a direct impact on our female aboriginal population, making them an at-risk group that our governments should be responsible for protecting.

If our government does become interested in protecting the lives of our female Aboriginal population, it would be worthwhile to focus on areas where the crisis is the most extreme. According to a study conducted by the Inter-American Commission on Human Rights, 28% of Canada’s murdered or missing Aboriginal women occur within British Colombia. It is noted that these incidents are reported primarily in urban centers, the most notable being Vancouver’s Downtown East Side.

The idea of Aboriginal women being ”invisible” to the larger community is reinforced by Dara Culhane as she explains the demographics of one of the most dangerous, drug and disease ridden neighborhoods in the country. This urban neighbourhood has one of the highest concentrations of Aboriginals in the country. She notes in her 2003 paper that there is certain ”race blindness”; at play in Vancouver’s Downtown East Side. As a country, we fail to recognize the ”social suffering” of Aboriginal people. It is uncomfortable for many to discuss the continuing effects of colonialism, however if we confront the ugly truth starting in neighbourhoods like the Downtown East Side, we can begin to take a more effective approach to help our Aboriginal women. 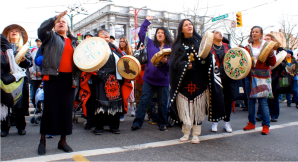 In order to effectively combat violence against aboriginal women in Canada, our political leaders must make changes. Pressuring politicians is exactly whatthe Up for Debate campaign, supported by Oxfam is doing. This campaign calls on party leaders to commit to a televised debate focusing on policies that affect the lives of vulnerable women in our country. Our government is obligated to represent the concerns of Canadians and they have fallen short of that goal. Now is the time to urge our representatives on Parliament Hill to take the lives of Aboriginal women seriously.

Delahanty, Julie. “We Need to Talk about Violence against Women, Canada.” IPolitics. March 5, 2015.