The SlutWalk movement began as a result of a safety conference held at York University’s Law School in Ontario in 2011. During this conference Constable Michael Sanguinetti stood up and recommended that “women should avoid dressing like sluts in order not to be victimized”. This outraged the students who demanded an apology, but this wasn’t enough. Constable Sanguinetti’s remark sparked women to take a stand, they organized a walk that they entitled the SlutWalk movement in response to the Constables victim-blaming remark. In 2014 over 1000 women and men took to the streets of Toronto for the third annual SlutWalk. 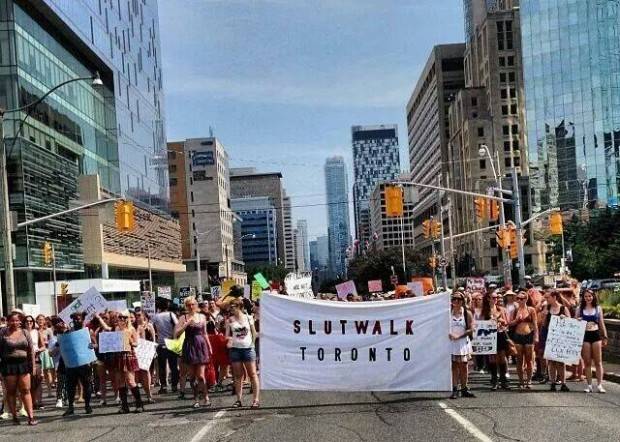 To address the SlutWalk we must look at why Constable Sanguinetti would possibly say such a remark. As a police officer he has surely been trained in how to talk about and deal with sexual assault issues, so why would he bluntly tell women to not dress like sluts? This reasoning goes back many years of history with the empowerment of men and the disempowerment of women. It has always been known that generally men are larger than women, this makes them on average better at physical activities. With size on their side men have the ability to overpower most women. Men have traditionally made more money than women, and this continues to be the case. In Canada in 2015, women with the same degree or level of education as men make significantly less than they do. Our society is inadvertently telling men that they are somehow better, and deserve more money simply because they are men. There is no valid reason for this difference.

It is also important to recall that women have only fairly recently been recognized as people in Canada, October 18th, 1929 to be exact. It has always been more beneficial to be a man in our society, they had the ability to own land, run for office and vote among other things, all of which took a long time to reach the female population. Being a man came with, and still does come with, a certain level of respect, status and power. It wasn’t until 1983 that a law was passed acknowledging that it was possible for a husband to rape his wife.

Statistics Canada tells us that only six out of every one hundred sexual assaults are reported to police and only about 1-2% of date rapes are reported. The numbers are astonishing, and with over 80% of sexual assault victims being females, why are they not reporting it? The rape-culture like views of Constable Sanguinetti might be a good place to start. Women feel that they will not be believed by police, or that they will be questioned about what they were wearing when the attack happened, or asked about their sexual history. The point of the SlutWalk movement is to eradicate this type of thinking. The way a woman dresses or her past sexual relationships are not relevant and should never be cause for her to be victimized.

The graph below is from Statistics Canada and shows the decline in police-reported sexual offences since 1993.

Women being victimized by the way they dress, or look stems from the way they are presented in society. Take for example Sports Illustrated which each year produces an issue as well as a calendar dedicated to a swimsuit edition. This issue became a stand-alone publication in 1997 and has brought in over one billion dollars since it began. The buyers of this issue, mostly heterosexual males see women in vulnerable positions wearing very little. The way that men and women are posed in photographs is extremely different, the man is made to look large and as muscular and masculine as possible. Women on the other hand are made to look as small or petite as possible and almost always in a vulnerable position by the placement of the hands, and legs and the way the head may be tilted. The women in issues such as Sports Illustrated swimsuit issue are exuding sex, leading the men viewing it to believe that women who dress in such a way are promiscuous and want sex, when this is most certainly not the case.

Many men have participated in the SlutWalk movement, but it cannot be known for sure how many of them take the issue as seriously as they should. The walk itself is working to make an impact on the rape culture thought process prominent in the minds of many in our modern society.

Since it began the SlutWalk movement has spread to over 50 countries in the world where women and men are taking a stand to make a bold statement against victim blaming and language such as the word “slut”. Many participants will often dress as what is considered “like a slut” or provocatively to draw attention to rape myths about the way a woman dresses. Some of those who walk identify as sluts, some as feminists, and others as allies, whichever it is, a powerful message about how to treat women and the issue of sexual assault is being sent by those participating .