Anti-scab legislation – is it time? 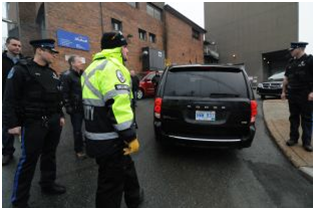 Brewery workers look on as private security guards and Royal Newfoundland Constabulary officers escort “replacement” workers onto the grounds of the Labatt’s Brewery on Leslie Street. Courtesy of The Telegram

On Tuesday March 26, 2013, police were called in to escort managers across the picket line at the Labatt’s brewery in St. John’s. About 50 unionized employees at the Labatt’s brewery in St. John’s launched an illegal strike on Monday, days before their contract was set to expire. The workers, who are represented by the Newfoundland and Labrador Association of Public and Private Employees, are upset that the company wants them to train three replacement workers in the event of a legal strike.

“We have told the company if they bring the scabs out of the building, our members will go back to work and complete their duties.”

This is a perfect example of the need for anti-scab legislation in Canada. Workers at Labatt’s in St. John’s are reacting in a predictable way to an act of aggression by the employer.

The intent of this paper is to examine the inequality created by the use of replacement workers as a method to prolong strikes.  I will be examining the history of anti-scab legislation, provincially and federally, over the past 40 to 50 years. Reasoned arguments from both sides are included regarding the effects such legislation will have on both workers and employers.

In examining the viability of anti-scab legislation we should first discuss a brief history of the matter.  As early as 1978 anti-scab legislation was introduced in Quebec, a law which remains on the books.  In 1993 such a law was passed in Ontario but lasted only until 1995. In 1975 a particularly violent strike at United Aircraft in Longueil, Québec led to, after 20 months on the picket line, a call for an anti-scab law by the provincial government of the day. The Parti Québécois, led by René Lévesque, implemented a series of labor law reforms in 1977 that included a ban on replacement workers.  Debate at the time centered on whether or not the Parti Québécois was currying favor with labour because of their support for Québec’s independence.  British Columbia introduced anti-scab legislation in the early 1990s.

Ontario’s teachers launched a campaign petition to support Bill 45: An act to amend the Labour Relations Act, 1995.  It was summarily dismissed by the Harris Conservatives.  In 2002 Premier Landry of Québec, in reference to prolonged strikes, stated that if Québec law (which did not have jurisdiction over the workers since federal laws applied) had applied maybe the conflict would have been avoided or at least shortened.

From the Canadian Union of Public Employees campaign.

If we are to take anything away from these debates it would be that many varied opinions have emerged concerning this most contentious issue.  Some say that the level playing field that some unions’ desire will never happen unless the legislation is nationwide.  Others argue that the job of the struck companies is to deliver product despite a strike.  There is also a school of thought that the removal of the right to strike will make all such arguments moot.

Unions in Canada are faced with an interesting dilemma.  The need for anti-scab legislation has been established as essential if they are to survive, but the reality is that more and more unions are losing members due to a plethora of reasons, not the least of which is the presence of contracting out provisions in collective agreements and changing relations with government and other unions.  While employers may fear that increased militancy may follow enactment of federal anti- scab legislation, most unions are only concerned with retaining the status quo.  It is a debate whose time has come again; the varieties and passion of the issue’s followers and detractors will ensure that reasoned debate is the only solution for both employers and unions.

Teamsters confronting the police in the 1930s

The following resources have been most useful in preparing this paper:

A Federal Anti-scab Law For Canada? The Debate over Bill C-257 by Larry Savage and Jonah Butovsky of Brock University. Published by Just Labour: A Canadian Journal of Work and Society Vol. 13 Spring 2009.