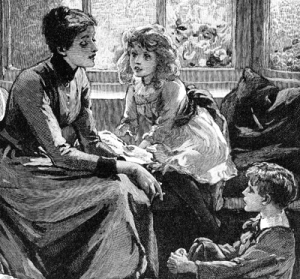 Women have traditionally been more responsible for child care than their male counterparts.

Who Does Unpaid Labour?

The short answer is women.

Women are almost universally held responsible for child care and domestic chores.  Advertisements for home appliances in the Ladies’ Home Journal (a prominent women’s magazine) throughout the course of the twentieth century shows how women’s domestic role was constructed by marketing and the media.  Ads rarely depict men and frequently promote better standards of housekeeping, describing women’s “labour of love,” that is, caring for husbands and children.

A prominent Canadian study published in 1975 estimated an astounding 68-hour work week for women employed in the labour force. (Meissner et al., see below) A 2001 study indicates that men spend less time doing unpaid labour than women do and that marriage and child-rearing increase this difference.  In the age group between 25 and 44, mothers of children under 25 do almost twice as much unpaid labour as fathers (Fast, et al., see below).