These photos are from a bold scheme for … doubling the living space of the town , pages 349 and 347.

In the early 1900s, the cheapest housing in St. John’s was to be found in the central core of the city. The area was close to the docks where many of its residents found work. The location was convenient as there was little or no public transportation and labourers could walk to their workplaces. The housing was also the worst in the city. The 900 houses in the area, some built following the 1892 fire, were in a deplorable state. A government inquiry stated in 1910 that “a very large number of tenements are totally unfit for human habitation.” 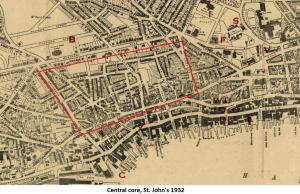 This map is excerpted from a Map of St. John’s Newfoundland, 1932 from the Memorial University Digital Archives Initiative (DAI) collection. The central core is outlined in red. Note the proximity of the area to the downtown, the docks (the finger piers reaching out into the harbour), the dry dock and railyard (bottom left at the edge of the map).

The central core was a fire and a health hazard. The wooden houses were not connected to the water and sewage system; open sewers ran down the hillsides. Water had to be carried to the houses from hydrants, called tanks by the residents. Crowding was intense. Some houses had two or three families living in them. Tuberculosis was widespread and enteritis was a frequent killer of infants and small children particularly during the summer months.