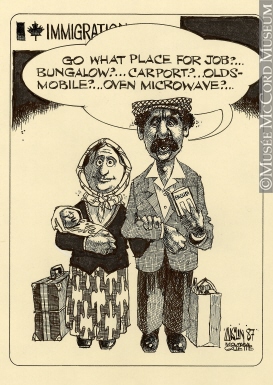 Foreign domestic workers are admitted into Canada under national policy, however, labour legislation falls under provincial policy. Because of this, there are no common labour laws across the country that ensure the standards of employment and working conditions for foreign domestic workers.

Most of the labour protection that is available is through a complaint-driven process. Meaning that foreign workers have the “right” to ask their employers – who are often also their landlords, and control their ability to stay in the country by keeping their job – for fair terms of employment. This opens up the possibility to unpaid overtime, sexual harassment, and assault.

Why do they take these jobs if they are so bad?

Foreign domestic workers continue to take these jobs because if they work for two years they are entitled to apply for permanent residency in Canada. If they are successful in this approach, or if they get landed immigrant status, all the rights that other non-immigrant workers enjoy will apply to them as well. After three years, landed immigrants are eligible to apply for full citizenship. With the ultimate goal of full citizenship, the hardships of the first years are worthwhile from the outside perspective of the foreign domestic worker.

How bad are the jobs?

A survey was done in 1997 by Stasiulis et al., for live-in domestic female employees. Stasiulis found that faced with deportation for non-fulfillment of duties, these domestic employees had to work long hours for low-pay in isolated or extremely regulated conditions.

Not all employment situations are bad, but the responsibility in domestic working conditions rests on the citizen employer who is not easily regulated, as compared to a business that is inspected regularly. Because they work in private homes, domestic workers often work in conditions that are not protected under social security, human rights, or protective labour legislation.